Jason McCartney MP welcomes plan to drive down inflation, as the Conservative Government invests £11 billion extra into schools and the NHS 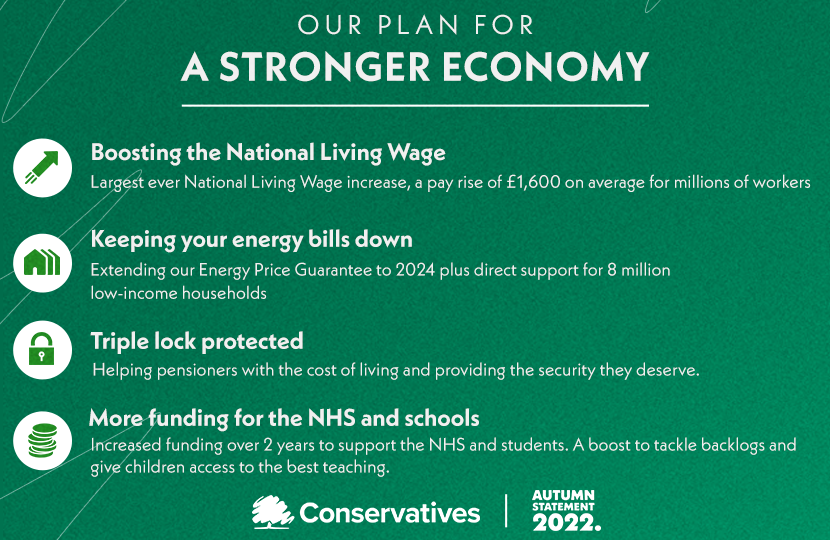 Today the Conservative Government set out in the Autumn Statement how it will restore economic stability, protect key public services, help control inflation, and boost growth.

It represents a fair deal for Britain and shows the Conservatives are the only party with a plan to help people and businesses across the Colne Valley, Holme Valley and Lindley through the tough times ahead.

Jason McCartney MP has welcomed an extra £11 billion in funding over the next two years for the NHS and schools. Public spending for the next two years will be protected at the levels set out in 2021 and then increase by one per cent in real terms a year until 2027–28.

£12 billion of extra targeted support is also being provided next year to help eight  million low income, vulnerable and pensioners households, on top of the cost of living payments being provided this year. This means additional payments of £900 for people on means-tested benefits, £300 for pensioners, and £150 for disabled people to help with their energy bills.

The Conservative Government is delivering on its commitment to protect the most vulnerable by uprating benefits in line with inflation and protecting the pensions Triple Lock.

Every household will be supported with higher energy bills following the announcement that the Energy Price Guarantee will be extended until April 2024, with a price cap increase from April 2023 meaning a typical household’s energy bills will be capped at £3,000.

The Conservative Government’s plan for stabilising the economy and protecting the public finances is fair and involves a roughly equal split between tax rises and spending cuts.
Windfall taxes on energy companies are being extended and increased, and instead of raising personal tax rates, the Government is freezing personal tax thresholds for a further two years.

It has announced that the Additional Rate threshold will be reformed, so that a taxpayer who earns more than £150,000 will pay £1,200 more in tax per year. Changes to the dividends allowance and Capital Gains Tax Annual Exemption Amount will mean the greatest burden falling on those who can afford it most.

This will support boosting growth, with £600 billion in capital investment over the next five years protected, along with the Levelling Up Fund, the UK Shared Prosperity Fund, R&D spending, and a £14 billion business rates cuts package to support high street businesses.

Today’s Autumn Statement shows you do not have to choose between a strong economy or good public services – with a Conservative Government you get both.

High inflation and slow growth are affecting countries everywhere, with a third of the world’s economy facing recession – it is right that this Conservative Government has come froward with a plan to restore economic stability and tackle inflation.

I welcome that even in these tough times the Government is investing an extra £11 billion into our schools and the NHS – delivering investment for our public services and to boost the economy. And by taking a fair approach to taxation, the Government has shown that it is prepared to take the tough but necessary decisions.

Only through sound management of the public finances can we continue protecting the most vulnerable across the Colne Valley, Holme Valley and Lindley and provide the long-term economic stability that is vital for everyone up and down the country.

We are weathering a global economic crisis, but the British people are tough, resourceful and inventive. My focus is on driving down inflation to get us through this.

I have had to make difficult choices, but have done so based on fairness. Increases in taxes and restrictions on public spending are tough, but we’re ensuring those with the broadest shoulders carry the heaviest load.

We’re protecting the most vulnerable with an extensive package of energy support, increases in benefits and the State Pension, and a rise in the National Living Wage.

And we are safeguarding our frontline public services with access to £8 billion for the NHS and Social Care and £2.3 billion for schools next year, while making sure we bring down debt and borrowing.