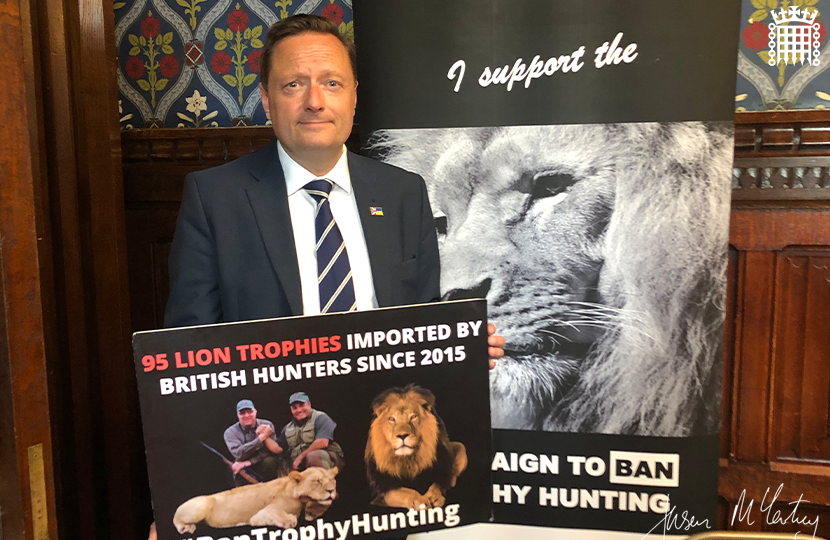 The Hunting Trophies (Import Prohibition) Bill would be the strongest of its kind in the world and has the backing of the Government as well as from UK wildlife and animal welfare groups. A recent opinion poll found that 86% of voters support a ban.

The world’s wildlife faces an extinction emergency of extraordinary proportions. We have to do everything we can to support conservation and to put a stop to these horrendous activities. They are unnecessary, cruel and only make matters worse.

Trophy hunting is frankly barbaric. It is something the British public rightly finds repugnant. This bill is supported by the Government and by opposition MPs alike. It shows Britain living up to its image of a nation of animal lovers and as a country that takes animal welfare and protecting wildlife seriously.

Many species are under growing threat of extinction. African elephants have recently been upgraded to Endangered on the IUCN (International Union for the Conservation of Nature) Red List. Lions have seen numbers collapse from 200,000 in the 1970s to 20,000 today. There are just 6,684 cheetahs, 3,142 black rhinos and 10,080 white rhinos remaining in the wild.

Eduardo Gonçalves, founder of the Campaign to Ban Trophy Hunting and author of several books about the industry, said;

This bill enjoys the strong support of wildlife and animal welfare groups. I urge MPs and Peers on all sides to give it their backing. It would implement the strongest ban on trophies by any country in the world. It sends a strong signal that it is finally time to bring this terrible colonial relic to a close.

Killing animals simply for sport, selfies and souvenirs is just plain wrong and belongs in the dustbin of history. We have to act now to save the world’s wildlife while there is still time.

Let’s come together as a nation, show our support for this bill and help put an end to this sick bloodsport. This is a bill of which Britain can be proud. I very much hope that politicians of every party get behind this bill and help get it passed as quickly as possible.

Trophy hunting is a cowardly plundering of our animal world. Britain should lead the way and refuse the import of any such hunted animal corpses.

As someone directly involved in working to save persecuted species, I can say from first-hand experience that hunting for ‘sport’ is putting tremendous pressure on our wildlife. Trophy hunting is simply inexplicable and inexcusable.

Everywhere you look, wildlife is on the brink. The last thing lions, elephants and other endangered animals need is for British people to be shooting them in large numbers for a bit of so-called ‘sport’. It’s utterly insane and we need to stop it now. The ban is a very positive step and I hope it is implemented without delay. We owe it to future generations.

World-famous primatologist Dr Jane Goodall has also given it her strong backing;

Trophy hunters kill for pleasure. They destroy animals simply for bragging rights, to demonstrate their supposed courage. How can it be possible that civilised people get a thrill out of killing an animal? Surely it is time to stop the senseless killing? Time is of the essence. Many of the species regularly killed by trophy hunters are already very close to extinction.

Some 5,000 trophies of endangered animals have entered Britain since the 1980s, when CITES (Convention on International Trade in Endangered Species) measures came into force. In total, as many as 25,000 body parts of wild animals are believed to have been shipped back to the UK by British trophy hunters over the same period.

The Queen’s Speech on 14th October 2019 pledged; “Proposals will also be brought forward to promote and protect the welfare of animals [Animal Welfare (Sentencing) Bill], including banning imports from trophy hunting.”

This was confirmed in the Conservative manifesto for the December 2019 General Election which stated; “We will bring the ivory ban into force and extend it to cover other ivory-bearing species, and ban imports from trophy hunting of endangered animals.”

The Netherlands currently bans trophies from approximately 200 species. Belgium will shortly be implementing an identical ban. France and Australia ban imports of lion trophies, while the US bans imports of certain endangered species such as cheetahs and polar bears.

Further information about British hunting trophy imports can be found in the report ‘Shooting Up: Are Britain’s Hunting Trophy Imports and Companies Booming?’ published in January, 2022 by the All-Party Parliamentary Group on Banning Trophy Hunting.

Queen Elizabeth II was a reassuring constant in our lives.